A dog’s heart is similar to the human heart in shape and absolutely identical in their function.

Of course there are some differences, generally in relation to the heart rates as well as the commonly diagnosed cardiac diseases of humans and dogs. 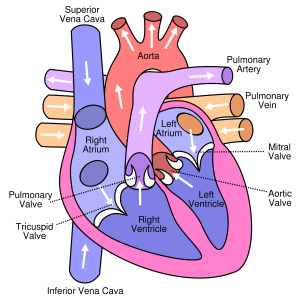 A dog’s heart and a human’s heart each have four chambers.
Two at the top of the heart and two at the bottom. Imagine a two up, two down home.

The upper chambers are called the right atrium and left atrium.

The two lower chambers are called the right and left ventricles.

The two largest veins in the body, the venae cavea lead into the right atrium.

The largest artery in the body, (dog or human) is the aorta and this pumps blood out of the left ventricle.So, left veins pump blood in and right artery pumps blood out.

There is a series of valves that maintain the blood flow in a uniform and orderly direction. The blood pulsates to carry out the rhythm and function of blood circulation.

This is where there are some subtle structural differences between a human heart and a canine heart.

The venae cavea (large veins that return deoxygenated blood) differ in the positioning as do the sizes and shapes of the atrial appendages but they all work exactly the same.

This is where the real notable differences are. The heart rate between a canine heart and a human heart.

Larger breeds will have heart rates that fall on the lower end of this range,

Toy breeds and young puppies have the highest rates.

Areas Where We Have Dog First Aid Courses

Emergency treatment and first aid for dogs is not a substitute for veterinary care. However it may save your dog's life before you can get to your vet.