Preparing for a terror attack

This isn’t about a personal conquest against terrorism or being an overnight security specialist, it is about carrying on with our lives and doing the things that we do normally, but being acutely aware that something terrible could happen and preparing for that event.

Terrorist attacks come in many different ways; from a lone active shooter, or suicide bomber to an unattended item, as well as vehicle attacks, car bombs and missiles.

We can only prepare for an attack by being vigilant and acting on anything that looks suspicious – report it to the Police Counter Terrorism Hotline on 0800 789 321 and follow their instructions.

In reality, are you able to call the police if you are hiding or indeed not wishing to drawer attention to yourself by shouting on the phone over the bangs and screams?

Right now, this very minute, before you do anything else – register your mobile phone number with The EmergencySMS service, http://www.emergencysms.org.uk/

This will enable you to SMS (text) the police and report an incident in silence, turn off the volume, the vibrate and the SMS notification ringtone, hide the screen light.

Sadly, we may not see a warning, everything seems normal until terror strikes.

It matters not if sohopping centre, sporting even or street festival, wherever you are and what you are doing – plan your escape. Look for the nearest exits to the outside, this is important and may sound strange but some exit signs take you into internal corridors that lead to fire exits, stairs and corridors,  you need to leave, not get further in.

If you are with family and friends, share your escape plan so that everybody fleas in the same direction. Show everybody the chosen exit and make clear the route that you will take. Do not go alone, even if you are on your own, act in groups, ensure all the family or friends go together.

Leave anything you are carrying, life is more important than possessions, they can hamper yourescape.

Running across a pitch after it has been cleared of players isn’t a good idea! – you need to plan a route that gets you to a safe place without exposing yourself to even more danger.

If you can’t run, hide, get behind anything, even a cloths rack, go under tables or seats.
If security, stewards and/or police direct you to a certain point, follow their instructions.

During a terrorist incident

Having planned your safe route out of the building or as far away from the scene as possible, if you are outdoors,  leave the scene as quickly as you can but stay calm.

Don’t try and dodge falling debris. you might miss one and be hit by another, avoid it, seek shelter, not canvas awnings or canopies but solid cover, even a sturdy table is better than no cover, under a row of seats could provide safe cover.

It is important to understand that cover does not mean ‘total safety’, it may protect you from terrorist’s eyes but not from line of fire,  high velocity bullets penetrate glass, stone, brick, wood, metal and flowerbeds. Seek good solid walls for the best chance of protection. If you can see the gunman, they could also see you.

Think about a scenario where there are hundreds of people in a confined space and one or more terrorists begin to fire at everybody. Total carnage, screams of fear and pain. Many dead and wounded, gun fire like an amplified popcorn pan.

The dilemma is …do you play dead or run for cover?

It isn’t unusual for terrorists to shoot at those on the floor or indeed walking among the fallen and ‘execute’ them, so if you can run/hide, do so rather than playing dead.

If you get trapped by fallen debris, stay closer to a wall rather than the centre to avoid more falling debris. If you can hear gun 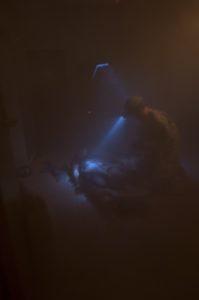 shots, shouting screaming and other indications of active terror, do not shout for help or raise an alarm, stay quiet, calm and safe.

Let’s say you were trapped in a room, off a corridor, in a basement etc, only when it has been quiet for some time and you are certain that it is safe to summon help, don’t shout out yet, conserve your energy – look for radiators and pipes, bang on them with a solid object continuously. Piping travels throughout a building and rescuers may hear you and respond.

Don’t use any flames in case of gas leaks.

If you are trapped in an area where there is a fire, keep as low to the floor as you can, crawl if possible towards an exit as long as it is safe for you to do so and move quickly as possible.

Smoke and heat inhalation can cause serious problems so cover your nose and mouth with a cloth, preferably a wet cloth or moist wipe. Try to stay below the smoke at all times.

Always touch a door for heat.

If you are hiding in a room, keep away from the doors as they could be shot at.

You may be tempted to go to a window and summon help, this action could make you a target if there is still an active attacker focusing on your building.  In addition, if there is a sudden explosion near to the building, you could be seriously injured, stay inside and away from windows as well as glass exit/entrance doors.

Never use a lift in an emergency.

Untold casualties can fall within a couple of minutes depending on the type of attack and weapons used.

Until the emergency services personnel are actually on scene and assessing/treating, it is difficult to confirm that if it is safe to move.

There may be obvious signs such as people now running around, some calling for police ambulances etc,  but take nothing for granted.

If you are indoors, in a cafe, bar club etc, try and stay behind upturned tables that can be use as a wall.

This is important, so think about it carefully, if you intend to treat casualties, you need to stay safe because if you are taken down, you are no good to anyone and will become another job for the ambulance crew or undertaker.

When it is safe to begin assessing the situation, remain low and look around you.

When you feel it is completely safe and intend to help those around you by administering basic first aid, it is important to prioritise those who need immediate and urgent help.

Those that shout and scream are conscious and a less priority.
Those who are silent and not responding need your attention first.

Anybody who is not injured or sustained minor injuries, (walking wounded) can help you, don’t be afraid to ask.

Some can comfort, some can treat wounds, some can scrounge around collecting materials that can be used as dressings.

Of the casualties that you have identified needing emergency care, you need to divide them into those who are bleeding and those who are not breathing.

Ask for any first aiders to come forward to administer CPR on those who are not breathing, if they have recently done a first aid course such as First Aid at Work, they will know what to do.

Hopefully, the casualties who are not breathing can be attended to by other first aiders.

If a casualty is not breathing but bleeding profusely it is important to treat the bleeding before CPR.

Catastrophic bleeding due to blade or gun attacks will cause the casualty to bleed to death in just a few short minutes.

Areas Where We Have Dog First Aid Courses

Emergency treatment and first aid for dogs is not a substitute for veterinary care. However it may save your dog's life before you can get to your vet.